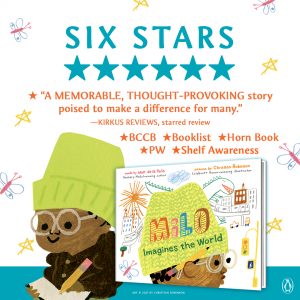 Christian and I are so excited that Milo Imagines the World is finally out. We’ve been doing a lot of virtual events with schools and libraries and bookstores, which has been great, but we are really looking forward to the day that we can meet readers in person. My greatest hope for Milo is that it inspires conversations about art and creativity but also implicit bias and the criminal justice system in this country. If your class has read the book — or your family — I’d love to hear where the conversations have gone. You can email me at hellomattdelapena@gmail.com.

From BCCB:
*One Sunday each month, Milo and his older sister take a subway ride that always makes him feel like “a shook-up soda.” He dives into his sketchbook, drawing pictures of people on the subway into scenes of his own imagining. Today there’s a lady in a bridal dress; he pictures her floating joyously into the air with her new husband in a hot air balloon. There’s a trio of breakdancers, and he pictures them profiled and shunned by a white shop owner and a doorman (“Milo doesn’t really like this picture, so he puts away his pad”). The image that will haunt him later in the day is the blue-eyed, spit-shined boy about his age who’s holding hands with his equally pulled-together father; surely he lives a life of luxury in a castle. When they finally exit and make their way into a line forming at a large, impersonal building, Milo sees the little boy again and realizes they are on the same mission: to visit their incarcerated mothers (“Milo studies the boy in the suit, his dad rubbing his thin shoulders. And a thought occurs to him: Maybe you can’t really know anyone just by looking at their face”). Now he rethinks his images. Maybe the bride is wedding a wife; maybe the breaker crew is welcomed home by the ritzy doorman. Enhancing a text that flows like poetry, Robinson’s artwork shifts between a third-person view of the action and Milo’s naïve crayon-like images. Fans of Last Stop on Market Street (BCCB 2/15) may suspect another de la Peña curve ball; again his “Never assume” message, utterly and gloriously devoid of preachiness, lands solidly in the strike zone. EB

From The Horn Book:

*Harold and the Purple Crayon meets twenty-first-century urban realism in this picture book (simultaneously published in Spanish as Milo imagina el mundo) by the Last Stop on Market Street (rev. 1/15) team. Milo, a diminutive brownskinned boy with round glasses and a lime green hat, boards a subway with his big sister. While she plays games on her phone, Milo studies people and imagines lives for them with his notebook and colored pencils. Robinson’s art alternates between color-saturated, double-page scenes of train activity and Milo’s hand-drawn sketches. Milo draws a suit-wearing boy on the train as a prince arriving at his castle; for a wedding-gown-clad passenger, Milo draws her imagined ceremony. Milo feels more comfortable watching than being watched but wonders what people imagine about him. He then re-imagines and re-illustrates many of his scenes, intentionally looking at his subjects in a different way. Milo and his sister finally reach their destination: a detention center, where they visit their incarcerated mother (the suited boy is visiting someone, too). As in Jacqueline Woodson’s Visiting Day (rev. 11/02), the joy and parentchild love shine through, and the climax comes with Milo’s sharing a special drawing he has created for his mom. This poignant, thought-provoking story speaks volumes for how art can shift one’s perspectives and enable an imaginative alternative to what is…or seems to be. MICHELLE H. MARTIN

From Kirkus:
*A subway ride marked by anxious people-watching builds up to Milo’s most important moment of the month.

As the subway train pulls away from the station, Milo, holding his drawing pad and pencil, sits beside his big sister, who holds her cellphone. Both kids present Black. Milo is “a shook-up soda” of excitement, confusion, and worry. “To keep himself from bursting,” Milo observes the people around him on the train and imagines the lives they go home to, drawing scenes of their lives in his notebook. He imagines one pale-skinned man with a five o’clock shadow going home to a rat-infested apartment building, eating alone. He imagines a young White boy in a suit going home to a castle in a horse-drawn carriage. But when Milo gets off the train, he is surprised to find that White boy heading to the same destination as him. His surprise leads him to rethink his assessment of the people on the train, expanding his ideas of who people might be. With the same combination of wide-eyed observation and suspenseful buildup to a socially conscious revelation that readers cherished in this duo’s award-winning Last Stop on Market Street (2015), this picture book offers a child’s view of the impacts of incarceration on families. De la Peña’s descriptive language and Robinson’s innocent, endearing art make for another winning package. (This book was reviewed digitally with 8-by-21-inch double-page spreads viewed at 56.1% of actual size.)

A memorable, thought-provoking story poised to make a difference for many. (Picture book. 4-10)

*It’s not uncommon for picture books to spotlight a curious kid who wonders what exciting things are going on behind closed doors, but de la Peña and Robinson’s Milo spends a subway ride imagining and drawing the lives of the people he sees in his train car. Milo, a small, bespectacled Black boy with a yellow knit cap, immediately wins readers’ hearts as he fills his sketchbook with imagined scenarios that he proudly shows to his older sister. Robinson intersperses scenes of his signature cut-paper collage artwork, bustling with vibrant activity and a wide array of people (a blue-haired bride, a grumpy man with a crossword puzzle, a trio of break-dancers) with images of Milo’s sketchbook, and the child-like drawings in thick crayon lines not only give insight into his imagination but his heart. One scene, in which the break-dancing boys are scowled at by a doorman, ends with a frustrated scribble: “Milo doesn’t really like this picture.” He reassesses his drawings, however, after a white boy in a suit and brand-new sneakers—clearly a prince—surprises Milo by having the same destination as he does: visiting day at a correctional facility. This reveal is likely to catch many readers in their own assumptions about Milo, reinforcing—without critique—the notion that you can’t know someone simply by looking at them. An excellent conversation-starter for modern times. — Julia Smith

*On a long subway ride through New York City, a Black boy named Milo looks around at the other passengers. He wears glasses and an oversize hat, and carries a sketch pad. His older sister sits next to him, busy with her phone, but they feel the same mixture of emotions: “Excitement stacked on top of worry/ on top of confusion/ on top of love.” Where are they going? Readers know only that the siblings take this journey once a month, on a Sunday. Working in blocky forms and warm, bright colors, Robinson creates a subway car full of distinct personalities as a tapestry of city life unspools in front of Milo. A Black woman in a wedding dress, a group of break-dancing girls with various skin tones, a jacketed white boy with neatly combed hair and spotless white Nikes—Milo imagines existences for them all, drawing in his sketchbook as readers look over his shoulder. For the boy in white shoes, Milo invents a princely existence, with a castle and servants to bring him food. But the boy gets off the same stop as Milo and waits in line at the same place, a moment that transforms Milo’s view of the people whose lives he’s imagined: “Maybe you can’t really know anyone just by looking at their face.” In this rich, multilayered journey, the award-winning creators of Last Stop on Market Street celebrate a city’s kaleidoscope of scenes, offer a glimpse at a child’s experience with parental incarceration, and convey that child’s keen observations about his circumstances and surroundings.

*Matt de la Peña and Christian Robinson’s Milo Imagines the World, like their justifiably celebrated Last Stop on Market Street, centers on a child’s regular ride on public transportation to a destination initially unknown to readers. But while Market Street‘s CJ asks why they’re going where they’re going, Milo Imagines the World‘s young protagonist is resigned to his circumstance and the accompanying agitation: “These monthly Sunday subway rides are never-ending, and as usual, Milo is a shook-up soda.”

To pass the time, Milo people-watches, using a notebook to record the places he imagines his fellow passengers going after they reach their stops. For a boy wearing a suit and tie, Milo imagines “the clop clop clop of the horse-drawn carriage that will carry him to his castle.” For a trio of break-dancers who cavort in Milo’s train car and who, like him, aren’t white, he glumly foresees that “even after the performances are over, faces still follow their every move.” Robinson is back with his robust paint-and-collage art. Chunky geometric shapes stand out with brazen brightness against various train stations’ determinedly industrial color schemes. To conjure what Milo puts in his notebook, Robinson switches to blunt strokes that look as though they were forged with crayons.

The occasion for the trip, it turns out, is Milo’s monthly visit to see his incarcerated mother. On the subway, Milo feels “excitement stacked on top of worry on top of confusion on top of love”; readers of Milo Imagines the World will feel compassion stacked on top of heartache on top of humility on top of hope. –Nell Beram, freelance writer and YA author

Discover: In another affecting picture book from the creators of Last Stop on Market Street, a boy fantasizes about the lives of his fellow passengers as he rides the subway to visit his incarcerated mother.