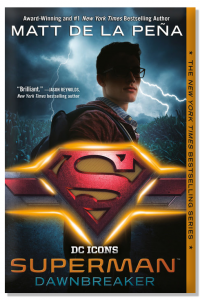 When the dawn breaks, a hero rises.

Clark Kent has always been faster, stronger–better–than everyone around him. But it’s not like he’s earned his powers . . . yet. Lately it’s difficult to hold back and keep his heroics in the shadows. When Clark follows the sound of a girl crying, he comes across Gloria Alvarez and learns that people are disappearing from the Mexican-American and undocumented worker community in Smallville. Teaming up with his best friend, Lana Lang, Clark discovers that before he can save the world, he must save Smallville.

★ “A wonderful, bold interpretation of a DC icon that aspires to embrace all readers, new and old.” —Kirkus Reviews, starred review

“This combination of Superman and De la Peña will fly off library shelves, as the award-winning author offers a glimpse into the Man of Steel’s beginning as a teenage outsider.”—Booklist

“This is a modern and relevant take on Clark Kent’s teenage years, ending with the protagonist taking on the role of Superman. New characters seamlessly interact with familiar ones.” —School Library Journal

“In his brilliant take on Superman, de la Peña shows us that there’s a chance we’ll all need to step up like Clark Kent—with or without a cape.”
—Jason Reynolds, New York Times bestselling author of Miles Morales: Spider-Man and Long Way Down

“Matt de la Peña’s Superman is the quintessential American alien. Despite being caught between two worlds, he’s everything we love about the Man of Steel: courageous, compassionate, and full of hope.”
—Gene Luen Yang, author of New Super-Man and National Ambassador for Young People’s Literature