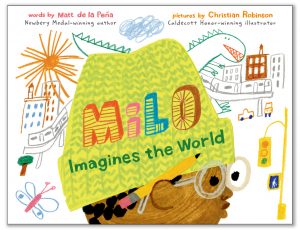 Milo is on a long subway ride with h is older sister. To pass the time, he studies the faces around him and makes pictures of their lives. There’s the whiskered man with the crossword puzzle; Milo imagines him playing solitaire in a cluttered apartment full of pets. There’s the wedding-dressed woman with a little dog peeking out of her handbag; Milo imagines her in a grand cathedral ceremony. And then there’s the boy in the suit with the bright white sneakers; Milo imagines him arriving home to a castle with a drawbridge and a butler. But when the boy in the suit gets off on the same stop as Milo–walking the same path, going to the exact same place–Milo realizes that you can’t really know anyone just by looking at them.

“Exquisite . . . Ends with a heartfelt punch.” —The TODAY Show

★ “In this rich, multilayered journey, the award-winning creators of Last Stop on Market Street celebrate a city’s kaleidoscope of scenes, offer a glimpse at a child’s experience with parental incarceration, and convey that child’s keen observations about his circumstances and surroundings. “—Publishers Weekly, starred review

★ “A memorable, thought-provoking story poised to make a difference for many.”—Kirkus, starred review

★ “Robinson intersperses scenes of his signature cut-paper collage artwork . . . with images of Milo’s sketchbook, and the child-like drawings in thick crayon lines not only give insight into his imagination but his heart . . . An excellent conversation-starter for modern times.”—Booklist, starred review

★ “A text that flows like poetry . . . Glorious.”—The Bulletin of the Center for Children’s Books, starred review

★ ” This poignant, thought-provoking story speaks volumes for how art can shift one’s perspectives and enable an imaginative alternative to what is . . . or seems to be.”—The Horn Book, starred review

★ “Readers of Milo Imagines the World will feel compassion stacked on top of heartache on top of humility on top of hope.” — Shelf Awareness, starred review

“Pictures brimming with activity, an endearing main character, and threads for thinking about art, families, and what we see in others make this a book that will hold up to many readings.”—School Library Journal

“A classic in the making.” —BookPage