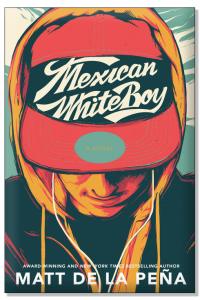 Even though he’s not built, his arms are long enough to give his pitch a power so fierce any college scout would sign him on the spot. A 95 mph fastball, but the boy’s not even on a team. Every time he gets up on the mound he loses it.

But at private school, they don’t expect much else from him. Danny’s brown. Half-Mexican brown. And growing up in San Diego that close to the border means everyone else knows exactly who he is before he even opens his mouth. Before they find out he can’t speak Spanish, and before they realize his mom has blonde hair and blue eyes, they’ve got him pegged.

Danny’s convinced it’s his whiteness that sent his father back to Mexico. And that’s why he’s spending the summer with his dad’s family. Only, to find himself, he might just have to face the demons he refuses to see right in front oh his face. And open up to a friendship he never saw coming.

“Danny is the remarkably human creation of young California-bred ”Ball Don’t Lie” writer Matt de la Pena. Mexican White Boy is the uplifting — but never corny, sentimental or sappy — story of a young man trying to figure out who he is. It’s emotionally rich, a vivid portrait of a So-Cal barrio and its inhabitants.” — Steve Bennet THE NEW YORK TIMES

“Everyone in the book faces mountains of obstacles, and in a fantastic move by the author that is not cloying or obvious, they also have the temerity to overcome them. De la Pena makes their world feel real by not shying away from the harsh realities.” — VOYA

“Readers will sense that there’s more to their family stories than Danny and Uno suspect, and while they wait for the two very different but equally realistic resolutions to play out, de la Pena keeps the chronicle of a summer’s worth of parties, romances, scheming, and hustles immediate and engrossing.” — The Bulletin of the Center for Children’s Books

“De la Pena deftly explores the subject of interracial mixing and the resulting sometimes confusing questions that are part of the baggage. Noticeable also is a certain rhythm to de la Pena’s writing, a beat having to do with the way his words fall onto the page, sometimes beyond simple syntactical order. A real treat for both the eye and the ear.” — Multicultural Review

“de la Pena blends sports and street together in a satisfying search for personal identity.” — Kirkus

“This fast-paced baseball story is unique in its gritty realism and honest portrayal of the complexities of life for inner-city teens, framed in the context of the emotional confusion of broken homes and bicultural pressures. De la Peña poignantly conveys the message that, despite obstacles, you must believe in yourself and shape your own future.” — The Horn Book

“Danny’s struggle to find his place will speak strongly to all teens but especially to those of mixed race.” — Booklist