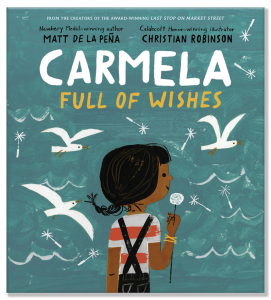 In their first collaboration since the Newbery Medal- and Caldecott Honor-winning Last Stop on Market Street, Matt de la Peña and Christian Robinson deliver a poignant and timely new picture book that’s sure to be an instant classic.

When Carmela wakes up on her birthday, her wish has already come true–she’s finally old enough to join her big brother as he does the family errands. Together, they travel through their neighborhood, past the crowded bus stop, the fenced-off repair shop, and the panaderia, until they arrive at the Laundromat, where Carmela finds a lone dandelion growing in the pavement. But before she can blow its white fluff away, her brother tells her she has to make a wish. If only she can think of just the right wish to make . . .

★ “This second de la Peña-Robinson collaboration after Last Stop on Market Street is no less powerful and beautiful. It touches on immigration, class, and loss without belaboring each. And it’s full of rich details, sharp and restrained writing, and acrylic paintings that look textured enough to rise off the page. It’s another near-perfect slice of life from a duo that has found a way to spotlight underrepresented children without forgetting that they are children first.”—Kirkus, starred review

★ “[A] beautiful book about the love of siblings and community. . . . A must read for everyone.”—School Library Connection, starred review