– Very sad to hear of Ned Vizzini’s passing. Feel bad for everyone: Ned, his wife, his new baby, his parents and friends, and his fans. I only met the guy a few times, but he was funny as hell and I could tell right away he was crazy smart. Maybe smart is dangerous. Bottom line: we lost one of our own. Strength to the folks he leaves behind.

– On a lighter note, I did an interview with Minnesota Public Radio about The Living and writing approaches and the power of teachers and librarians, and then Sherman Alexie called out my jump shot through the nice interviewer: listen to the podcast.

– John Green picked his favorite books of 2013 and included The Living!

– My story, “Passing Each Other in Halls” (originally published in One Teen Story) appears on Electric Literature’s Recommended Reading site: read the story here.

– For those of you who have read The Living, I’m knee deep into the revision of The Hunted (a sequel to The Living) and I’m super excited about where the story has gone. Shy lands in CA. And it’s bad. Okay, that’s all I can say. And the desert definitely factors in. This one completes Shy’s story. I’m gonna miss that dude.

– Due to a Stub Hub ticket situation, I was able to sit courtside for the Nets-Pacers game. I was so close to the action I inadvertently snapped this photo of Paul Pierce’s ass. The Pacers put the smack down! I feel bad for Brook Lopez. That dude was having a solid year. But big men sometimes have chronic problems with their feet. Doesn’t bode well for the future. 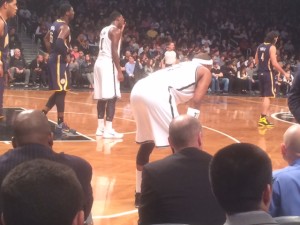 – Wishing everyone a healthy and happy 2014!