Writers. We are so very flawed. So human. We mess up in life. Our books never quite measure up to what we hoped they would become when we first conceived them in our heads. Or maybe it’s just me…. But what a gift to be reminded that there are real people out there, YOUNG people, who sometimes use our humble little stories like rungs on a ladder, as they go up, up, up, as they inch toward who they will become, which is nothing short of the future.
(Hey, why do you write children’s books anyway? Will you ever write a “real” book? You know, for adults? Hmm…. It’s like Clarice Lispector says in A Hora Da Estrela: “Things were somehow so good that they were in danger of becoming very bad because what is fully mature is very close to rotting.”)
At the National Book Festival in DC last week I met Denae. She picked up Mexican WhiteBoy in her eighth grade language arts class as a joke when her teacher demanded everyone read silently for the first fifteen minutes of every class. At that time she defined herself as a “non-reader.” To her surprise, though, she ended up liking the story. Because she identified with the main characters. Which lead to her reading the rest of my books on her own. Outside of school. Which lead to her discovering so many other books. She’s now a sophomore at Howard University. She now describes herself as an avid reader. How amazing that our words can sometimes play an infinitesimal role in the journey of a young person. 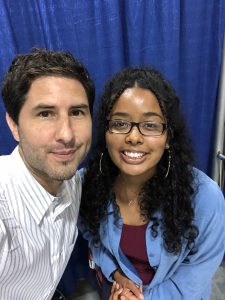 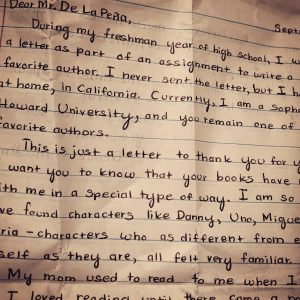