Penguin Young Readers has just announced CARMELA FULL OF WISHES, my next picture book with illustrator Christian Robinson. This is a very special book for me (the story is set in a migrant community), and I can’t wait until folks get a look at the amazing illustrations!

Here’s the press release from the publisher: 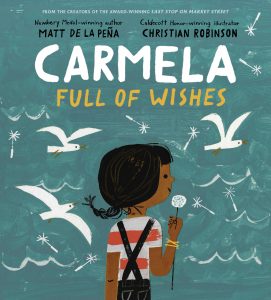 Carmela Full of Wishes will hit shelves in October 2018

Like Last Stop on Market Street, CARMELA FULL OF WISHES illuminates the beauty of working class neighborhoods, and the power of community and family. Told through the lens of a heartfelt sibling story, the picture book explores what hope looks like in a migrant community steeped in Mexican culture.

“In a time when we openly speak of building walls,” de la Peña says, “I was moved to tell the story of one young Dreamer, Carmela, who is filled with hope and heart and just a little dash of sass — like any other girl her age. Carmela Full of Wishes is the book I’ve always dreamed of putting into the world, and I’m so honored that the brilliant Christian Robinson is the one who has brought it to life.”

This new book marks the award-winning duo’s first collaboration since Last Stop on Market Street was published in 2015. Robinson commented, “When I first read Matt’s manuscript for Carmela Full of Wishes, I was reminded of my favorite Ezra Jack Keats quote: ‘If we all could really see each other, exactly as the other is, this would be a different world.’ I believe Matt is the kind of storyteller that brings us closer to that world, and it was a privilege to work with him again.”

In addition to winning the 2016 Newbery Medal and a Caldecott Honor, Last Stop on Market Street received a Coretta Scott King Illustrator Honor and four starred reviews. A New York Times bestseller, it was named one of the best books of 2015 by NPR, Wall Street Journal, The New York Times Book Review, and many others. It received widespread critical acclaim, and has been lauded as “a textual and artistic tour de force” (Kirkus Reviews, starred review), “a generous and inclusive reminder about counting one’s blessings” (USA Today), and “quietly revolutionary” (Sherman Alexie). The Wall Street Journal raved, “That material poverty need not mean spiritual or imaginative poverty becomes beautifully clear in the quietly moving pages of ‘Last Stop on Market Street,’” while Huffington Post declared that the book would take “its deserving place among the all-time greats.”

Matt de la Peña is the Newbery Medal-winning author of Last Stop on Market Street. He is also the author of Love; A Nation’s Hope: The Story of Boxing Legend Joe Louis; and six critically acclaimed young-adult novels. Matt teaches creative writing and visits schools and colleges throughout the country. Matt lives in Brooklyn, NY. You can visit Matt at mattdelapena.com or on Twitter @mattdelapena.

Christian Robinson is a 2016 Caldecott Honoree and also received a Coretta Scott King Illustrator Honor for his art in Last Stop on Market Street. His picture books include the Gaston and Friends series; Leo: A Ghost Story; School’s First Day of School; The Smallest Girl in the Smallest Grade; Josephine: The Dazzling Life of Josephine Baker; and many more. You can visit Christian at theartoffun.com or on Instagram @theartoffun.

About Carmela Full of Wishes:

When Carmela wakes up on her birthday, her wish has already come true—she’s finally old enough to join her big brother as he does the family errands. Together, they walk through their neighborhood, past the crowded bus stop, the fenced-off repair shop, and the panaderia, until they arrive at the laundromat, where Carmela finds a lone dandelion growing in the pavement. But before she can blow its white fluff away, her brother tells her she has to make a wish. If only she can think of just the right wish to make . . .