Immigration is a complex and loaded issue. Obviously. I don’t believe the job of the fiction writer is to come up with answers to such issues but to ask interesting questions. Two of my recent books are set atop our country’s current struggle with immigration. When Clark discovers his alien background in Superman, he realizes how similar his reality is to the migrant workers who are struggling to carve out a space for themselves in Smallville. In Carmela Full of Wishes, a young girl growing up in Watsonville, CA, works through her own perception of hope in America in the context of a forced separation (her father has been deported). In both works I’m careful to avoid taking sides in terms of policy (aside from making for bad fiction, I’m not equipped to have a nuanced discussion about policy), but when it comes to the treatment of other human beings . . . my point of view is clear. I believe all human beings should be treated with dignity and respect. I believe families should be allowed to stay together.

Yesterday I received two very different pieces of news. The first was an email about Superman. The writer found it disgusting that I would use an iconic storyline like Superman to “push my political agenda.” He said that he reads fictional books, “especially the superhero action ones, to get away from all the political hot points in this country.” Though I would argue that I didn’t have a political agenda in the novel (I had a humanity agenda), I get where he’s coming from. Some folks read to escape. Or they read to reenforce their own ideology. (This is why I love writing for young people. Young people are still building an ideology, so they’re more likely to read both sides of an argument. They’re more likely to read with an open mind as opposed to reading with a closed one.) But not all books are for every reader. Not all AUTHORS are for every reader. Escapism is perfectly valid. It’s just not want I’m interested in. I prefer to reflect the world/country as it really is (or at least how I see it). I prefer stories that challenge, that ask us to “see” (though I also acknowledge that no reader will get to the “seeing” part if they’re not simultaneously being entertained or having fun).

The second bit of news. Carmela Full of Wishes is back on the NY Times Best Seller list. Maybe it’s just for a week. But it makes me so proud to know that a quiet, little story about a girl growing up in a migrant community — in a time when migrants are so often vilified or used for political leverage (and, yes, both sides are guilty of the later) — can be on a best seller list. 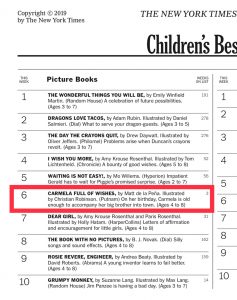 Maybe my July 4 is a good example of America and how it is many things at once. The 4th is for family and celebration and country, but it’s also a worthwhile time to consider the complexity of our history, our founding. It’s the pride we feel about our women’s soccer team’s world cup success, and it’s the inhumane images we see at border detention facilities. It’s reading for escape and reading to be challenged. It’s a scathing email and a best seller list.

I don’t have an answers for any of this, for anything really.

But I do have a point of view.

And I do believe the ability to live within paradox and nuance is a lost art.