This May I went back to my alma mater, University of the Pacific, to deliver the commencement speech. I was also awarded an honorary doctorate and inducted into Phi Beta Kappa. This is easily one of the greatest honors of my life, and I’m humbled to forever be a part of the UOP family.

Two decades ago, when I set foot on campus for the first time, I was a basketball player. A scholarship kid. Kinda rough around the edges. But even back then I had secret dreams of becoming a writer. I filled notebooks with rhythm-based poems I showed to nobody. Slowly but surely I became a student. I turned intellectually curious. I took classes with passionate professors who introduced me to the right books, some with diverse characters that made me feel seen.

It seems almost impossible that I would end up on stage so many years later, offering some thoughts to the 2019 graduating class. That I would be introduced by the president of the university as an actual published author.

And as I said in my speech, I’ll never forget my own graduation day. The tears welling in my Mexican grandmother’s eyes as she held my diploma in her hands. Because one of us had graduated college! And I still remember the celebratory dinner we had at the Chile’s on Pacific Ave that night. Me, my mom, my dad, my two younger sisters and my grandmother. I remember my family. Together. Sharing two orders of those amazing chips they have. At one point during dinner my grandmother reached over and patted my knee. She didn’t say anything. Just patted my knee. And I understood. 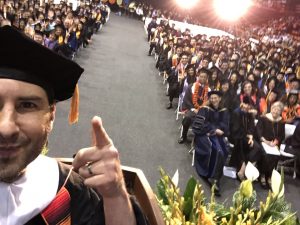 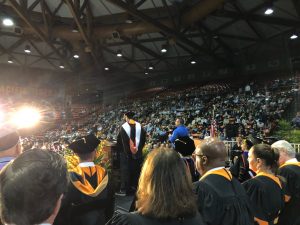