The summer is almost over, and I’m about to take a full on writing vacation. I’m not typing a damn word of fiction for an entire week. Seriously. . . .

Okay I might take a couple notes about my upcoming revision of The Hunted (which is the sequel to The Living). Oh, and I might do a little work on this top secret picture book I’m hoping to finish by the end of September. (Can’t say a word about the topic. For real, my lips are sealed. . . . It’s about a Mexican American, but that’s all I’ll say. . . . A Mexican American who died WAY too young. Okay, Matt, enough!)

Anyway, other than that, it’s vacation time. I’m going to sit in a Barcelona cafe with C and read, read, read. And eat paella. And check out museums. And maybe take a few notes about stuff.

Before I take off, though, I wanted to post two pictures that sort of give you the highs and lows of all my journeys this past spring. First the “low.” I met this great kid on one of my favorite visits of the year (Lucyle Collins Middle School): 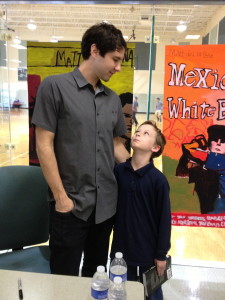 Sometimes it’s cool to be looked up to (even if it’s only literally).

And the “high” of the year had to be an event I did in Santa Cruz, CA (where my folks live!) with Lance Goulbourne of the Santa Cruz Warriors (the feeder team for the Golden State Warriors) — an event sponsored by one of my favorite independent bookstores in the country, Bookshop Santa Cruz. Here’s  Lance and I: 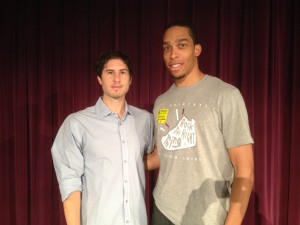 Closest I ever got to the NBA right there. Honestly, though, this shot really reminds me of my hoop days. I was the shortest guy on my college team (and I’m 6’2″!). I didn’t feel remotely tall until I became a writer and started hanging out with people like Sara Zarr (just kidding Sara!).

Hope everyone is having a great summer! I’m off to Spain. Where I won’t be writing. (Except for the notes I’m letting myself take about The Hunted. And maybe parts of the picture book. And there’s this middle grade idea I’ve been kicking around lately. Might be the first book I ever set in Brooklyn . . . .)