It’s hard to meet writing deadlines. It’s even harder to meet them when you’re on the road, flying from one city to another for nearly forty straight days (Honolulu was one of the cities so don’t feel too bad for me). Luckily I love the projects I’ve been working on. And I loved all the events I did over that stretch (aside from a brief stint at an airport hotel in Seattle where I ate a bad piece of salmon. That was a rough two days). Anyway, I wanted to pop in and give a couple quick updates before I sink back into the basement for two more weeks . . . 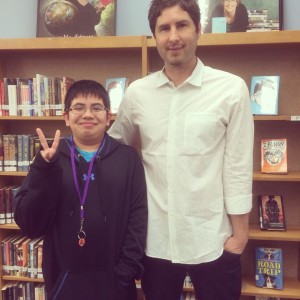 I need to explain something about Seth here, who’s a student at St Helens Junior High outside of Portland. He donated his entire savings account (over $200 bones) to help get me to his school. He said he did it because he’s mixed race too. And he wanted his classmates to be exposed to my books because they feature mixed-race characters. Seth, man. His savings account is at zero now. But I will be a fan of his forever. From one Mexican WhiteBoy to another, brother.

Update: I tried to give back Seth’s two hundred bones, but his parents wouldn’t allow it. They said it was something Seth really wanted to do. Folks on Facebook were really supportive of Seth’s actions, and a lot of people (including many talented authors) asked for a school address so they could send a note to Seth. Well, his teacher (Mr. Charles Sanderson, who’s one of the most passionate teachers I’ve ever met) was nice enough to provide an address. If anyone would like to reach out to my man, Seth, you can reach him here:

The French translation of The Living is out! Simone Elkeles was nice enough to send me this pic of the book on the shelves of a Parisian bookstore:

Man, I never thought a book of mine would end up in damn Paris. Super exciting visual!

Two years ago, a student named Ana Verdugo invited me to Tucson High in Arizona where Mexican WhiteBoy was subsequently banned from the curriculum (along with several other innocent books by Hispanic authors). This invitation opened up a whole big can of worms. You can read more about my visit here. Anyway, because of the fantastic Tucson Festival of Books, Ana and I got to catch up recently.

I think it’s pretty cool that her and I are still in touch. I suspect we will be for a long time.

I feel very lucky that I get to meet so many cool readers around the country. It’s mostly high school kids and some middle schoolers. But every once in a while I get to talk to the little guys. Like my man here, who I met at the Houston Public Library:

I’ve been working really hard on three separate things. The revision of The Hunted (which is the sequel of The Living). There are only two books in the series so The Hunted will wrap up Shy’s survival story. I promised I wouldn’t share much about the novel just yet, but I will say this . . . while The Living takes place in the ocean, The Hunted is set mostly in the California desert — which is quite a contrast for Shy. And shit gets pretty CRAZY. I should be able to share the cover soon. 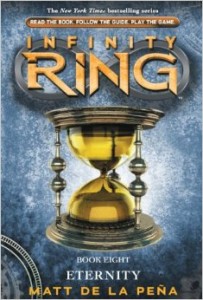 And last but not least, I just finished a (long) short story I’m super excited about. It’s called “Angels in the Snow,” and it comes out this October in an anthology edited by the great Stephanie Perkins, titled My True Love Gave to Me. The lineup of authors Stephanie put together is really amazing. You can read more about the anthology here. And it’s the first YA piece I’ve ever set in Brooklyn.

Okay, back to work.