The Living came out yesterday!! 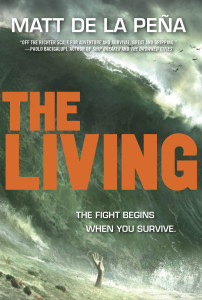 I wasn’t able to announce it on the actual on-sale day because I was speaking at a middle school in Ohio, and a high school in Ohio, and the Youngstown chapter of IRA. This is the first time I’ve ever done a speaking engagement on the day a book came out. Usually I spend the day in a Manhattan champagne bar, sipping Veuve and holding up my newly pubbed book for the bartender to see. And anyone else who wanders in — mostly celebrities*. But being in schools was really cool. I brought several copies of The Living with me (about 100) and handed them out to kids. “You guys are the first people to own this book!” I shouted into the mic. One kid asked me if he could have A Fault in Our Stars instead. I had him escorted off the premises immediately. Punk!

Here are the first two kids who received books. (They’re way in the back row, holding them up. Okay, you can’t really see them that well. I’m not a great photographer mid-speech): 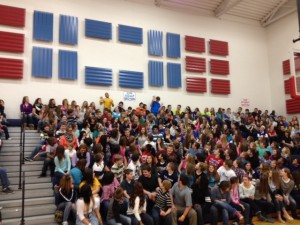 Here are some high schoolers who got The Living later in the day: 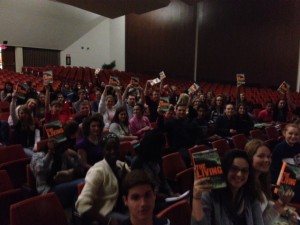 And then I spoke to some really great educators at a fancy antique shop in Youngstown (seriously): 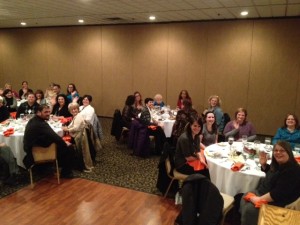 When I told them I grew up rooting for their NBA team, the Cleveland Cavs (during the Mark Price days), many of them stood up and cheered: 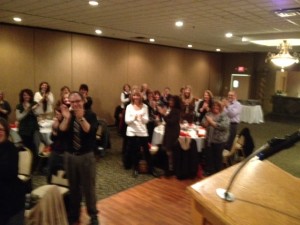 I met one teacher who really inspired me. Her name is Michelle Best (head of the English Dept at the middle school). Sometimes you meet a truly passionate teacher who you know is changing lives. Mrs Best is one of those people. Her students are very lucky. She has a writer’s sensibility actually. I wonder if she’ll ever put pen to paper. Michelle: 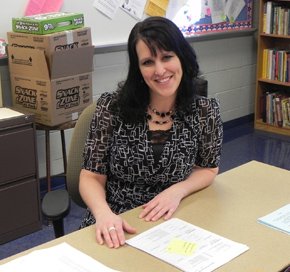 It’s about The Living.

The Living a different book for me. It’s an action-driven disaster novel. I wanted to take my usual mixed-race, working class characters and put them in a bigger context. Why? I want to reveal to a wider audience the heart and dignity (as well as the flaws) of kids growing up on the “wrong side of the tracks.” My dream is for The Living to reach suburban kids, too, this time. And private school kids. And middle class adult readers who dig YA. So instead of bringing story conflict to my characters and letting them fight it out on their own turf (rough southern California neighborhoods), I brought my characters to the conflict, in this case a luxury cruise ship bound for Hawaii. Shy, the main character, works in housekeeping on the ship, and it’s the first time he’s ever been exposed to wealth. While he’s in the middle of the Pacific, a massive earthquake slams California. And it’s bad.

I’d be so honored if you’d pick up a book and give Shy and The Living a read. You can pick up the book at your local independent or Barnes & Noble.

Or you can order through indiebound here.

Or you can order it on Amazon here.

If you want a signed copy you can order it through my local independent in Brooklyn, Community Bookstore.

Also, if you haven’t seen it, I did an essay for NPR about a kid named Joshua and the power of books and my old man. The essay is here. Would love for you to check it out. 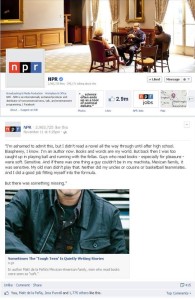 Oh, and here’s something I learned about the world. When John Green tweets something, that tweet ends up all over the damn internet. It’s nuts. As we say in the hoop world, Dude is a beast! 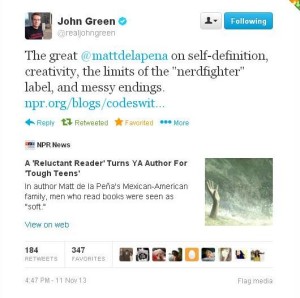 Thanks everyone (who read this far) for considering The Living!!!

*(Note: I’m not even sure there’s such a thing as a champagne bar. Is there? There probably should be. Also, I had to google “best brands of champagne” in order to come up with “Veuve.” I don’t even like champagne actually. Shit gives me a headache.)