When I heard I was going to be interviewed on NPR’s Weekend Edition I immediately started sweating. And unconsciously gritting my teeth. National radio? Me? What if I sounded like an idiot or stumbled over my words or accidentally referred to Scott Simon as “Bob” Simon? What if I dropped a series of accidental f-bombs and they weren’t even able to run the interview?

Luckily Mr. Simon is a pro. We talked for a few minutes before the interview, and I think he sensed I was a bit nervous. I told him it was kind of surreal hearing him say my name — because I’d been listening to his voice for a long, long time. He immediately started talking like Mickey Mouse, claiming the voice people heard on the radio was essentially the work of a team of talented NPR sound engineers. This made me laugh a little. Which put me at ease (his intention, of course). And then we launched into the actual interview. 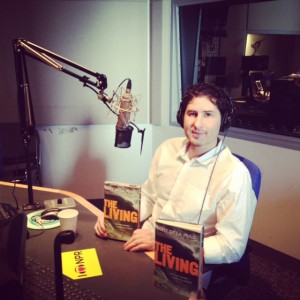 We talked a lot about my new novel, The Living, but we also talked about literacy in general and YA and the story of my old man’s path to books and education. After the interview, Mr. Simon told me he’d read the essay I wrote on NPR’s Code Switch blog. It moved him, he said, which was the reason he wanted to have me on his show.

I actually didn’t think I’d be able to hear the segment as it aired on the radio. I was on a panel at NCTE in Boston at the time with Matthew Quick (one of my favorite writers) and Alan Sitomer (super smart and good dude). 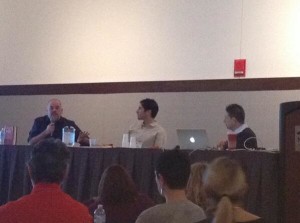 As soon as the panel ended I leaped out of my chair and sprinted through the halls of the convention center. I wanted so badly to get to my hotel room in time to hear the interview. It wasn’t easy. I was accosted by a few gangster teachers along the way! 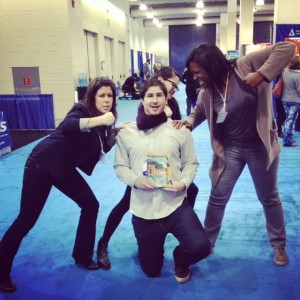 I also had to stop and sign a book for Judy Blume!!! (Didn’t get to hand it to her in person, but still.) 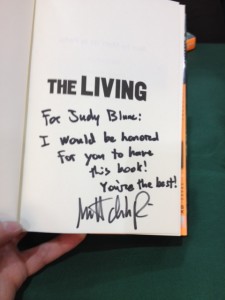 But eventually I made it into my room. I turned on the radio just as Mr. Simon was introducing my segment.

It was surreal hearing myself on NPR. When I’m on the road I listen to their podcasts all the time: while I’m getting ready in the morning, while I’m working out, even while I’m sleeping. Weekend Edition is my parents’ favorite show. I think it was also surreal for them to be able to hear me mention them (and their work ethic) on air. The only bad part? I thought I sounded like a buster (it’s really weird to hear your own voice on radio). I cringed at times, thinking: Come on, Matt. Put some base in your voice. You sound like a bitch! But I got over it eventually. By the end, all I felt was gratitude. Not only for the folks at NPR for putting me on air. But for the folks at Random House, too. For pushing the hell out of a book with a “multicultural” main character. And for C. And for all the awesome people who I’ve met on the road over the years who’ve already gone out and picked up a copy of the book.

I’m also happy to announce that The Living has received two more starred reviews (from VOYA and Shelf Awareness)! Here’s a blurb from both:

Starred Review, Shelf Awareness, October 23, 2013:
“In Matt de la Peña’s compulsively readable thriller…the breakneck plot will draw readers in, but Shy’s personal discoveries about how the world is skewed toward those in power, and his decisions to do the right thing, will hold their attention.”

Starred Review, VOYA, December 2013:
“A great read for those looking for adventure and survival stories with some good character growth and introspection for others, this should have a wide and satisfied readership.”

(Editorial note: Yes, I do wear the shirt every day. Seriously. Double check the above pics.)