Yep, that’s John Green in there, too. And Jacqueline Woodson. And Grace Lin. And Tim Federle. And Marie Lu. And Lamar Giles. And Arthur Levine. Everyone really showed out in support of this important grassroots campaign. I would like to ask you all to check out the video and consider donating to the We Need Diverse Books movement. If you’re a big baller and have some a chunk of money to spare, there’s this cool private dinner in Brooklyn with myself and Jackie Woodson where I can PROMISE an awesome time. You get to invite a few other people. And there will be tequila. Or wine if that’s more your style. Unless you’re in middle school, in which case either option would be illegal. Anyway. Thank you so much for checking out the video and considering our movement! 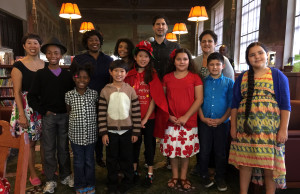